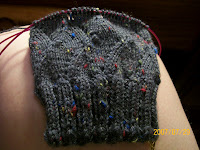 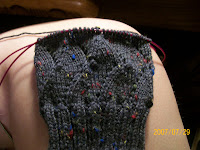 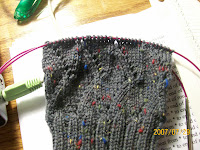 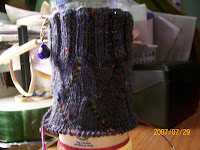 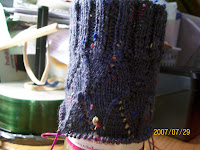 So I've been a wicked fast for me knitter lately, I started this on Thursday after knitting group and I'm done with the ribbing and one full pattern repeat. I'm test knitting this for someone I met on Ravelry, next up the chart instead of the written out instructions.

Well the poll as it looks right now is four for cable, so I'm going to try a simple thin cabled scarf i found a patter in an old stitch book I have that could look nice. I'll keep you updated. I kind of like the look of the 'dickie' neck covering too, but I don't know if she would like it and the yarn is kind of bulky. 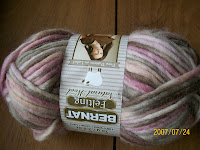 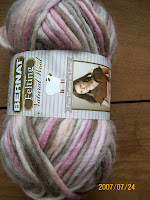 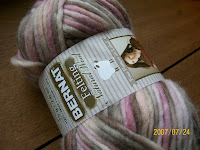 4 Wishes by The Panopticon

And the Panopticon, never ceases to amaze and amuse. Go check it out.
Posted by Sarah at 9:19:00 PM No comments:

I can't believe it, I missed my blog-aversary, it's been so crazy with HP coming out and everything I've totally missed the Big day. Well happy belated blog-aversary to me!!!
Posted by Sarah at 8:39:00 PM 1 comment:

So, it's been crazy busy around here and I've had no time to knit on the shawl or anything else.

Saturday: SCA event for the Shire, River Revel II. I was busy from the time I got up until the time I got home and went to bed. The event went well, we had more people than we thought we were going to get so that was cool. And we had a lot of people there that are at least some what known in this area if not the whole kingdom and they said that they would push for even more people to come next year. We're very close to two very large groups that could easily come and play but many choose not to, and that sucks for our shire. I'll find out Thursday how everything pays out and if we lost money on another event or if we actually broke even/gained. I will say I am very happy with the quality of people that came if it isn't going to be quantity.

Sunday: The Twin's Birthday Party, that morning we accidentally all slept in until 8:30a, so the day started off with a run, and I still wanted to sleep more. I did some quick grocery shopping, baked a cake, made a noodle salad, cleaned the kitchen and bathroom, T did the rest of the house, bless him. We had a decent turn out considering the late invites, I told everyone way early but didn't get invites out until the last minute. We had plenty of food, and just enough pineapple carrot cake with cream cheese frosting, pics to come. I finally got to start reading HP7 that evening after the monkeys were all in bed and everyone left, I read until 1am and decided I needed to sleep and then read all day Monday until just before T got home. He of course bought himself a copy just in time to read mine :D. We'll give one to my sis for her birthday and all will be alright with the bookcase :P.

Tonight, T is at fight practice and I think I may just go to bed, I should knit on the shawl but at this point I'm so far behind whats one more day.
Posted by Sarah at 8:22:00 PM No comments:

Holly is a powerful protective wood that good for use against evil, but it also represents dreams and fertility. Your dragon's heartstring core makes your wand very effective in hexes.

Holly is a powerful protective wood that good for use against evil, but it also represents dreams and fertility. Your dragon's heartstring core makes your wand very effective in hexes.

I want to make this, not that I know any strand or sweater making knowledge but hey it's beautiful, one stitch at a time right?? 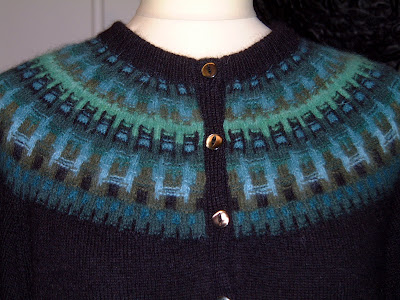 Reposting Poll to keep you voting.

I'm feeling rather spoiled....and its all for a laugh.

I waited to post this because I thought it deserved a definite viewing on the blog. I'm feeling quite warm and fuzzy by the showering of gifts for such a simple thing as a laugh, but sometimes that is what is needed in ones day. Well, Jen, you made mine, twice over, you should have seen me dance when I got both packages. 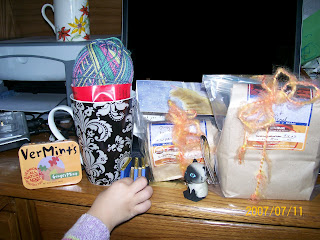 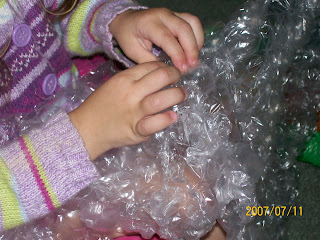 Juju thought that this was her gift in the bag, Daddy has gotten the girls addicted to Bubble Wrap. 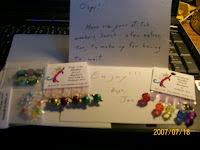 Another Lovely note, saying she was sorry she hadn't sent these in the first package. It was fine with me, more fun stuff to open. Aren't all of these lovely and very very nicely made. Top Left: 4 fimo clay markers, Bottom Left: 10 lace & sock sized markers with very simple beads ( I love that ), Next Over: Stop 'n Go set of 5, and Far Right: 5 Dice Markers (these remind me of Roleplaying :D) 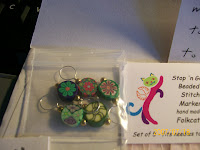 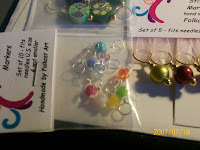 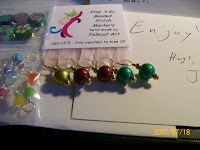 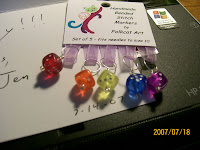 Labels: for me, friends, gifts, knitting, others, pics, stuff, yarn

4 Happy Years as of Today in Wedded Bliss :D :: Man I need to work on my tongue in cheek :: But for real I wouldn't say bliss but happy is definitely correct. Yea us!!!


PS just so you know its actually like 11 1/2 years together so not really much compared but marrying at 15 is frowned heavily upon where I live so we waited 7 1/2 to tie the knot.
Posted by Sarah at 8:26:00 AM 1 comment:

Paging all of your stashes out there.

My friend is in need of some help, if you have any please either email me or her. She can also be seen at her blog.

I purchased this yarn last summer from a local yarn shop in St. Paul
that no longer carries this color or this brand since I am unable to
order another skein from them. I did order 2, 50 gr skeins online,
but the dye lots did not match close enough and my socks (knee highs
with colorwork) are already up to the calf. I would prefer to avoid
re-knitting both socks with a new dye lot (or different yarn) so I'm
attempting another option first.

I'm placing a call to fellow knitters to look through your stash with
the possibility that you may have a skein of this yarn floating about
somewhere. If you do, I would be more than happy to trade the 2, 50
gr skeins for your 1 skein. I probably only need 50 gr left to
finish this project and I have no problem exchanging my 100 gr for a
50 gr or partial skein if I can find a matching dye lot. If you don't
have this yarn but have seen this yarn/ color available at your LYS,
let me know. 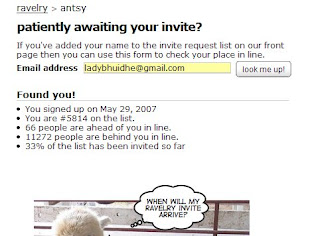 Poll for you all.

I just purchased three balls of Bernat Felting Natural Wool in English Rose. Now if you knew my Gran you would see this yarn and say that it was her exactly. The few issues are that there is only 84 yards/77 meters per 75 g/ 2.6 oz and I have only three. She is a fairly tall woman and she is English so I want something with lots of English taste. What would be the best pattern for this type of yarn? Would a simple cable look nicer than a lace or vice versa?

I tend to live in the past because most of my life is there.
Herb Caen
Posted by Sarah at 8:38:00 PM No comments:

That is all I'll say, I don't want to spoil it for anyone that may read the blog, but in a couple of weeks there may be something.
Posted by Sarah at 8:58:00 AM No comments:

So a couple of weeks ago, T let me get out of the house and go to a spinning gathering at Color Crossing. The gathering was a different day, I was mis-informed, so shopping had to still happen. I bought a skein of Tofutsies in a lovely green and white color, I'm thinking knee highs, maybe knee high monkeys. Well even though the skein looks small it can actually get two socks from one ball, but I figured not two knee highs.

Last night I went to the lace chart class at the Yarnery and I got a 10% off my next purchase, well I had to get something it was only good for a week. I know I'll get another ball of Tofutsies, but what dye lot, shit! Look at two different balls, eh, this one looks good.

I was just sitting here and thought I should check the dye lots, yup that's right, they are exactly the same. Freaky is all I can say. Now I don't know how the dye lots work on this yarn and if the whole market gets the same one but at the store I didn't see the dye lot number and thought they were like some acrylics and just all the same, but obviously not. Damn Lucky is all I have to say and I have some Monkeys to make. 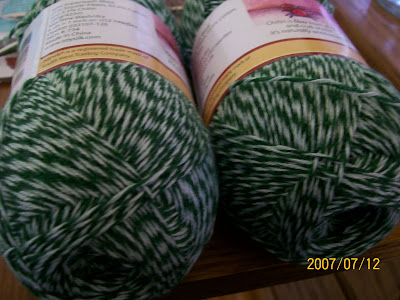 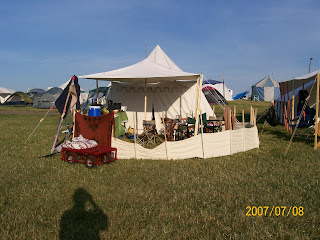 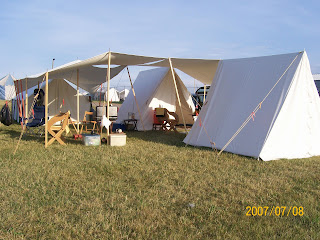 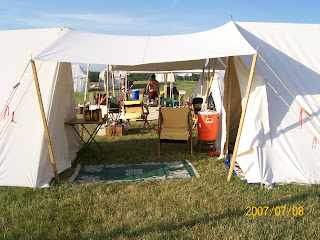 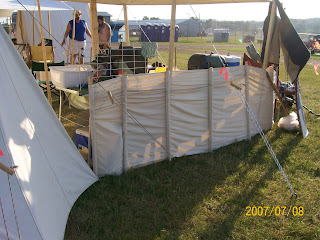 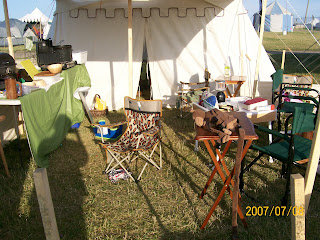 Your Score: The Noble Elk

Here's your results! Your spirit animal has a Nobility ranking of 15 out of 18.

Your spirit animal is the noble elk. They are the most adaptable of all, and only guard those with great wisdom and understanding. The elk is a highly noble creature, and has a strong spiritual force that will guide and protect you well. You are truly blessed to have such an amazing and mystical spirit animal. It is extremely rare to have an elk as a spirit animal.

***Wondering how this animal was chosen for you? These questions were carefully thought out to see how important you hold certain virtues such as: humanism, self-knowledge, rationalism, the love of freedom and other somewhat Hellenic ideals. Some of the questions were very subtle. Your score was then matched with an animal of corresponding nobility. However, you shouldn't think this was a right/wrong sort of test, but more of an idealistic values test. It's ok to not hold these values, you'll just get an animal spirit of lower stature if you do!***

Your Score: The Otter

Here's your results! Your spirit animal has a Nobility ranking of 11 out of 18.

Your spirit animal is the otter. Playful, curious and fun animals, they are truly the start of what can be considered a noble creature. Otters are good at figuring things out, and make great friends. You are lucky to have one as a spirit animal. Otters are fairly rare as spirit animals.

***Wondering how this animal was chosen for you? These questions were carefully thought out to see how important you hold certain virtues such as: humanism, self-knowledge, rationalism, the love of freedom and other somewhat Hellenic ideals. Some of the questions were very subtle. Your score was then matched with an animal of corresponding nobility. However, you shouldn't think this was a right/wrong sort of test, but more of an idealistic values test. It's ok to not hold these values, you'll just get an animal spirit of lower stature if you do!***


My test tracked 1 variable How you compared to other people your age and gender:

Gettin' My Learn On

So I took a lace chart reading class tonight, very good confidence
booster. Only problem one of my issues has been resolved for me in 2
different ways by 2 different people. Well it's sort of fixed, I said
fooey on the gauge swatch they lie anyways and I'll just knit the shawl
hoping it all works out in the end. Otherwise, the class was very nice,
unfortunately I was a little to advanced for the class, but it was a
great boost in my abilities trust. The shawl is started and now I need
to knit knit knit. I'll show you a pic tomorrow.

Well time for some sleep, We have an SCA meeting tomorrow night and
hopefully a HP viewing.